You are here: Real Spiritual Experiences :: Life's Challenges and Lessons :: Voice Of Awakening

Chug-clunka, chug-clunka. Screee, screee! The sounds echoed as I push the heavily loaded mail-cart down the long hallways. There is a mail stop. Drop off the mail, pick up the mail, smile at the person behind the desk. Push on, there are five floors still to go.

In my mid-forties, after a rising business brokerage career which sputtered at the realization of the industry's nature and then launching a business enterprise which didn't fly, I went to work for the mail-copy department of an electric power company. All the energy and vision I had for experimentation and innovation sank into the muddy depths of daily routine.

Lily pads grow from the muddy depths. And that is what happened in the corporate hallways. As the cart rolled, a new vision took root and sprouted in me. I called it Vision River Guide, an anthology of one page profiles of books having a similar theme. The subject of the first Guide was "Finding Life Purpose."

I began waking up in the wee hours of the morning to write book profiles and letters to publishers asking for review copies. During the day, while pushing the mail-cart down the hallways, I worked out the details of the project in my mind.

The vision was to put two volumes of the Guide into print and onto the infant Web, with links to all types of related resources. As the cart rolled and the gears turned in my mind, the enormity of the project overwhelmed me. "How can I do all this?" I asked myself. "I am just one person."

I parked the mail-cart to go into the Men's Room and the thought came, "I trust the River." To me, the River was a metaphor of the ever-present, always flowing current of life. 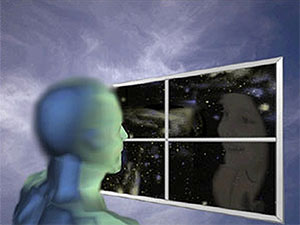 At the urinal my mind silenced for a moment. Then words welled up from deep within, "I Am the River." This voice was distinct from the voice of my thoughts. It was in a deeper tone, knowing and wise. I could feel the eternal space from which it came. Tears flowed as I stood.

In the months that followed, two volumes of the Guide were completed and printed. Someone who found my personal web site offered to host the online version in a collaborative effort. Greater still, when I committed to a choice to be true to myself and leave behind a life that was not me, Vision River Guide became a key in the hands of destiny for meeting my life partner, Kati.

In my position in the mail-copy department, I saw the waste of the company every day. Month after month, tons of recyclable paper went into a dumpster for the landfill. Trees were my friends. I calculated that the waste was equal to fourteen trees each month - from one company! The senselessness pained me at first, but I grew numb. The company was headed by a former military man. Recycling would not bring profit, and he had no tolerance for questioning or insubordination.

While heaving boxes full of paper into the dumpster and grieving in my heart, the voice said to me, "You will make a difference here before your days are done."

After three years in the mailroom, it was time. On the last day of my employment, I distributed a letter to each department with a passionate call to recycle. The "big man" was furious and would have fired me if it weren't my last day. However, the letter touched people who cared. Years later, I learned the company was still re-cycling.

After leaving the mail-copy job in Atlanta, I worked as a demo person in a Sam's Club and gave samples to customers. My entertainment was watching people push their shopping carts. A woman came up to me and asked how I liked my work. I replied dryly, "It's not my highest ideal."

She looked directly at me and said prophetically, "And you won't be here for long."

She walked off and was gone around the corner.

A month later a psychic woman in Oregon invited me to work with her. I bought a mini-van, gave away most of the five hundred books I had collected for Vision River Guide and drove from the southeast corner of America to the northwest as the River carried me to the adventures which lay ahead.

In the Pacific Northwest, I met my life partner and joined with her on spiritual adventures which began with our doing energy healing work together in Mexico and led us into the Idaho wilderness and to India, Spain, Germany, the Hawaiian islands, New Zealand and crisscrossing the States as we made 45 moves in 15 years. One of the life-changing lessons of all the moves, as we hauled heavy luggage filled with what we owned, was about the burden of possessions.

Life sent us on assignments to care for the elderly, terminally ill, other-enabled, autistic and at-risk populations. We visited remote farm communities in Ecuador, on Maui and the Canaries. Now we are living a light footprint and sustainable lifestyle in central California. I still listen to the inner voice which set me on this grand adventure, and now know that 'all that is' and I are one being.

The image for this story is a rendition that was created for me by a talented young man. The final version distinguished the front cover of Vision River Guide.

Other personal experiences by EmanatePresence

Comments about this spiritual experience

No comments yet, be the first! Please read our guidelines before posting. The author, EmanatePresence, has the following expectation about your feedback: I will read the comments and participate in the discussion.

© The spiritual story Voice Of Awakening is copyrighted to EmanatePresence. Edited by spiritual-experiences.com.