You are here: Real Spiritual Experiences :: Inspiring Transformation / Inner Change :: Dispel The Illusion With A Greeting!

Dispel The Illusion With A Greeting!

Sometimes a spiritual experience is a single event which expands 'one being consciousness' within individual human awareness.

Such events have happened in my life a few times, especially when I let go of judgment or relaxed my grip of control on a situation.

Sometimes the spiritual experience is a longer process, a more gradual evolution, such as the realizations which have arisen over writing chapter-by-chapter blog posts on the spiritual classic, 'The Impersonal Life.'

Writing can activate self-revelation in many ways. Writing the posts for the Whole Human blog revealed to me what is being hidden by the illusion of separation - that in actuality we are one being:

Are - in the present moment

Being - of pure consciousness

The illusion of separation is a key topic especially during these times. It is a well-covered subject, but here is a new angle - dispelling the illusion with a four word greeting - 'we are one being.'

Dispelling the illusion is about effectively dis-empowering the spell of the 'illusion of separation' by thinking, feeling and acting upon this potent four word combination which can also be a greeting or a closing. 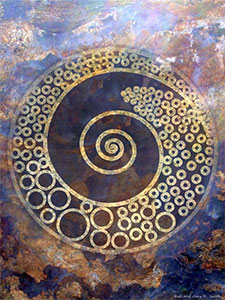 The great illusion is not referring just to our living separated (in our minds) from our source and each other. The illusion has distanced our human awareness from knowing the one true self and identity of every human and that 'we' have never been separated. Revealing the actuality veiled by the illusion of separation, that O.B. Is the True Self of all that is, answers a big question for every person, 'who am I really?'

It also can answer, 'why am I here?' for every person who accepts that everything exists to be the vehicle of O.B.'s expression. For me, that translates to knowing my deepest purpose is to unfold the unique center of awareness designed by my original blueprint, to be the Gary expression of O.B. The fullness of unfolding is to consciously be the defined human and the undefined totality in the same moment.

'We are one being' means much more than being inter-connected. It means more than 'we are one people' or 'we are one family,' or 'the brotherhood of Man.' In nature we see some examples. Certain mushrooms cover enormous areas beneath the ground yet above ground are seen as individual units. The mushroom organism below surface level is a metaphor of the one being of pure consciousness, while the stalks and caps correspond to individual humans. The illusion of separation which has kept us from knowing we are one being has prevented us from knowing who we really are and what we are capable of manifesting as human beings.

The greeting which, when felt and acted upon, dispels the illusion of separation, is: 'We are one being.' An example of greeters reminding each other of their true nature is namasté, which goes in the same direction but not the distance. Although the meanings seems similar, when felt deeply there is a great distinction.

I am suggesting to use 'We are one being' as a more potent alternative to namasté and other greetings, to start breaking down the illusion of separation and speak a great truth that has been hidden from our awareness until now.

In the short time since I began imprinting myself with 'we are one being' consciousness, I have felt a softening and warming in relationships as they too become less rigid and more fluid, more compassionate. There has been a lifetime of hardening, and the softening is also a process.

In 'we are one being' consciousness, there is no motive of money-making, no individual profiting at the expense of another. There is sensitivity towards each other, appreciation, agreement, exchange and co-creation.

In human society today, hierarchies create divisions of inequality such as employer and employee, landowner and worker, teacher and student. Family members are often given preference over non-family, though in the deeper connections these distinctions do not exist.

Hierarchies, rank and social standing dissolve in w.a.o.b. Consciousness where the same honor and respect is accorded to every person and everything. Until that consciousness fills human awareness and is lived more commonly, appropriate boundary setting is still needed at times. Yet in O.B., much of the energy that currently goes towards aggressively controlling, defending and dividing is diverted to inner work - and challenges that once triggered reactions are seen as opportunities to master one's own emotions rather than be ruled by them.

In the awareness that we are actually one being, each unique expression is lived out responsibly towards the Whole.

Much remains to be communicated, as it is experienced, about living as 'we are one being.'

Other personal experiences by EmanatePresence

Comments about this spiritual experience

The following comments are submitted by users of this site and are not official positions by spiritual-experiences.com. Please read our guidelines and the previous posts before posting. The author, EmanatePresence, has the following expectation about your feedback: I will read the comments and participate in the discussion.

I keep prodding my ego to listen to me but it doesn't want to budge a muscle. Very annoying

© The spiritual story Dispel The Illusion With A Greeting! is copyrighted to EmanatePresence. Edited by spiritual-experiences.com.